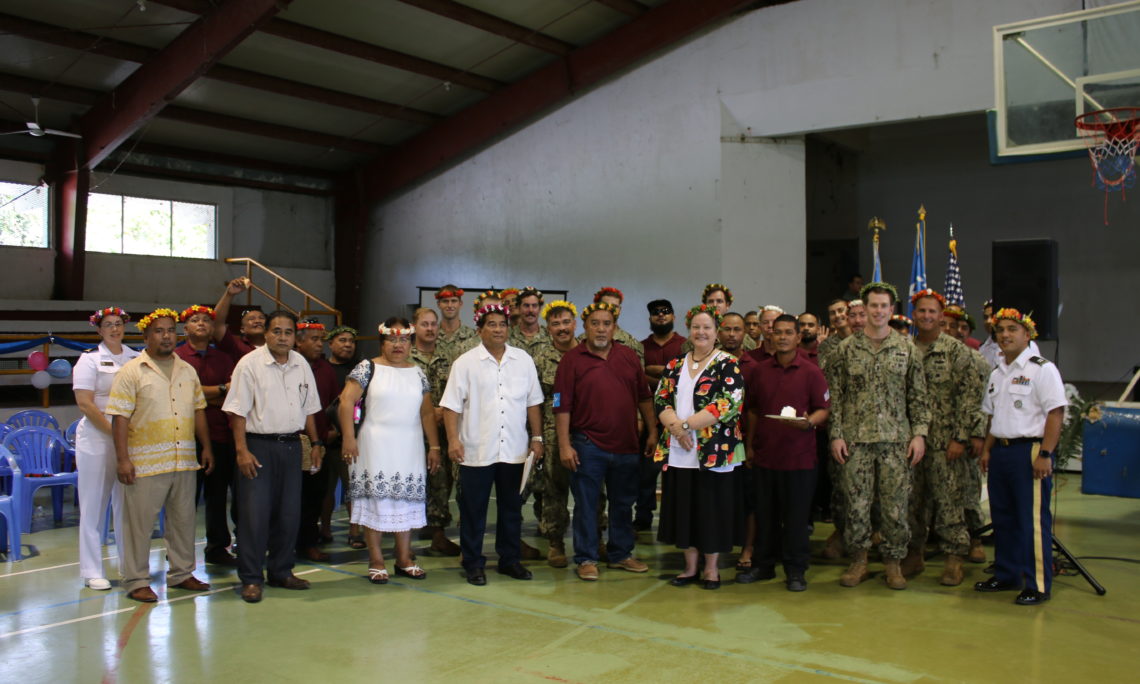 2019 Veterans Day Celebration in Kosrae, FSM.
On Monday, November 11, 2019 Heather Coble, Deputy Chief of Mission( DCM) attended a Veterans Ceremony in Kosrae to honor all men and women in the U.S. Armed Forces.

Robson Henry, Kosrae Island Veterans Association (KIVA) provided the welcoming remarks and spoke of his appreciation to all the spouses and families that support all members of the military.  The Honorable Kosrae State Governor Carson Sigrah spoke of the special bilateral relations between the United States and the FSM and thanked the Embassy for participating on the special occasion. Also performing at the Veterans Day all the way from Honolulu, Hawaii the U.S. Navy Pacific Fleet Band Woodwind Quintet “Tradewinds” performed both the FSM and U.S. National Anthems and Amazing Grace to honor the fallen heroes of the FSM.

During the ceremony Lt. Colonel Erin Richter and Jason Richter from U.S. Embassy Kolonia had a Marine Corps cake cutting ceremony to signify the passing down of knowledge from the oldest marine to the youngest marine. Mr. Carlton Timothy, a Marine Corps Veteran and Sergeant Jerry Tolenoa, active Marine Corps. Both gentlemen are from the state of Kosrae.

Following the formal remarks, nine citizens from the FSM were sworn into the U.S. Army. Administering the oath of enlistment was Captain Kurt Diaz from the U.S. Army Recruiting Station in Guam. Outgoing KIVA President Robson Henry expressed his appreciation in having CPT Diaz, a native of Guam and Staff Sergeant Kamal Marcia from Yap “we are honored to have them here as they have become a part of our KIVA family in Kosrae”.