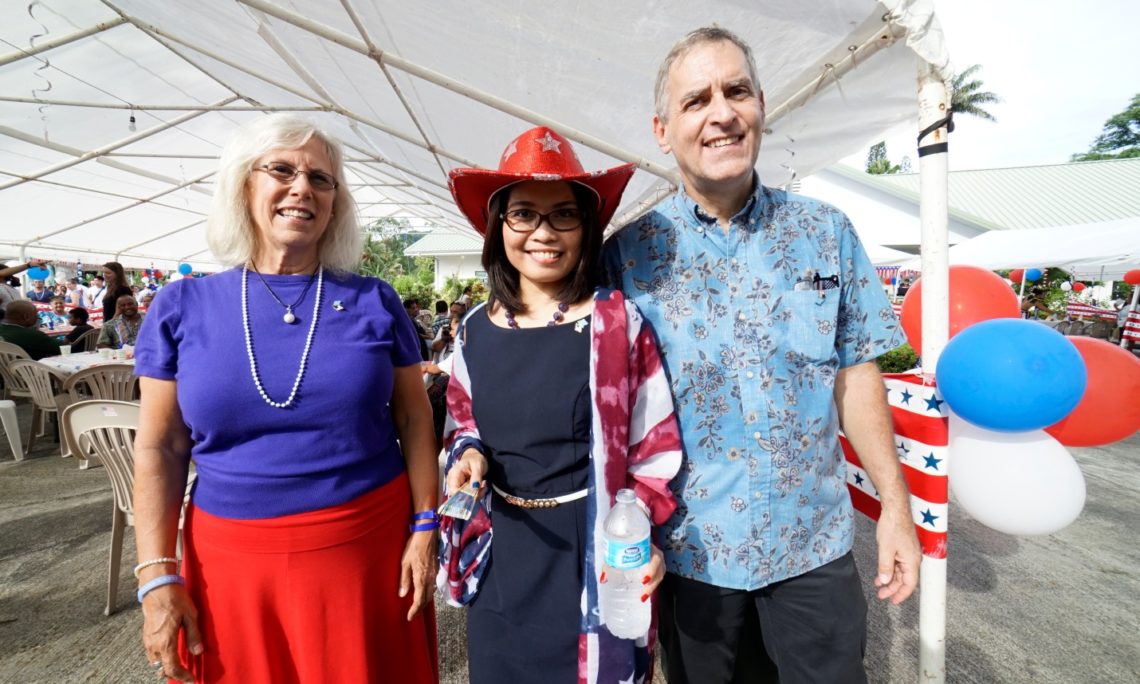 (U.S. Embassy, Kolonia) The U.S. Embassy in the FSM marked the 241st anniversary of United States Independence with a Fourth of July Celebration on the Embassy grounds.  U.S. citizens, veterans of the U.S. Armed Forces and their families, dignitaries from the FSM and Pohnpei governments, members of the Diplomatic Corps, Non-Governmental Organizations, and other agencies attended the event.

Festivities between 4:00 and 7:00PM included face painting, a photo booth, a chalk art contest, and balloon twisting by Ms. Janice Warren. Participants in the chalk art competition, from 7 to 25 years of age, decorated the Embassy walls with scenes on the theme of Ehupene (Pohnpeian for togetherness or unity).  Through their creative efforts, they showcased the close and unique relationship between the United States and the Federated States of Micronesia. Prizes for the contest were donated by Ace Office Supply, Bank of Guam and United Airlines.

FSM Ambassador to the United States of America His Excellency Akillino H. Susaia spoke on behalf of the FSM National Government and reiterated FSM’s long history with the United States. In his remarks he stated “It would be an exaggeration to say that the values represented by the birth of America have been fully accepted and embraced in every corner of the globe. But the FSM is proud, whether at the bilateral level or at the multilateral level, in collaborating its efforts to safeguard and uphold the institutions of democracy. The citizens of the FSM take great pride in standing shoulder to shoulder with their American comrades in all regions of the world to protect and defend freedom and liberty to the maximum end of their ability.  Not only do the FSM and the US have shared interests, they also have common obligations or responsibilities for humanity. It is proper that we remind ourselves of our common responsibilities on the occasion of the anniversary of America’s birth.”

The Honorable Marcelo K. Peterson spoke on behalf of the Pohnpei State government and stated “We Micronesians are the guardians of our own islands but we affirm our common purpose and commitment to the enduring partnership with the United States of America for peace and progress. Both nations face future challenges, however, with vision and cooperation there are many opportunities for success.”

Ambassador Riley spoke of the unique relationship and unity between the United States and FSM, stating “One clear symbol of our unity, and of the FSM’s bright future, is Ryback Malakai, a young man who just graduated from Xavier High School students and is now attending the U.S. Coast Guard Academy. He joins Youky Susaia Jr., also at the Coast Guard Academy, and Hitoshi Phillip Oue, attending the U.S. Naval Academy. They will return to the FSM following graduation to use their education to further the future development of the FSM. They, like many other FSM citizens who join the U.S. military, demonstrate the close and mutually beneficial relationship between our nations. They, like the many other FSM citizens who are educated in the U.S. and return to a life of service in the FSM to serve their country, will help to ensure a bright future for the FSM.”

MC and Deputy Chief of Mission Joanne Cummings mentioned American efforts to achieve liberty, explaining that men and women share equally in the gifts and obligations of democracy.

The U.S. Embassy in Kolonia would like to recognize the following sponsors and volunteers that made this years’ event a success!