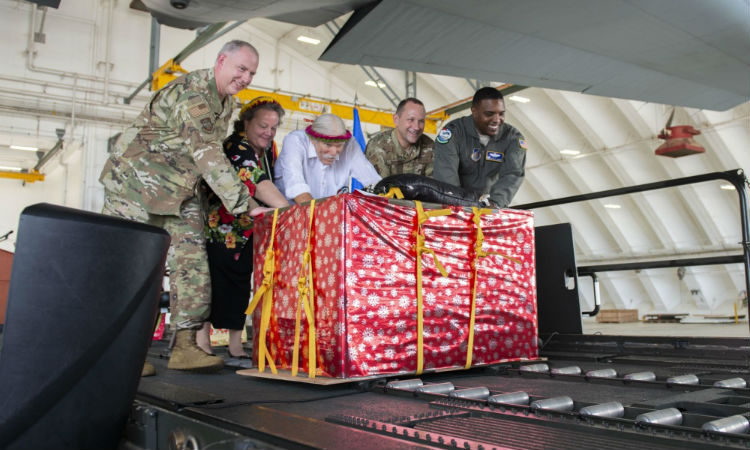 ASAN, Guam (Dec. 10, 2018) – Service members and civilians gathered to witness the ceremonial pushing of a box filled with humanitarian goods into a C-130 during the Operation Christmas Drop push ceremony held at Andersen Air Force Base, Guam Dec. 10.

The airborne holiday bounty is bound for far-flung islands across Micronesia.

Boswell emphasized the satisfaction that comes with generous service and gave well wishes that the operation continues through the years.

“It is only fitting that, in this season, at this time, we pause and reach out. The reward for our efforts is simple, but yet, again, profound. It’s the satisfaction to help our fellow man,” Boswell said. “I’m honored to represent the men and women of 36th Wing, our Airmen, our families, our community and the people of this island as we recognize the importance of Operation Christmas Drop and the purpose of what we are doing today.”

“There will always be challenges that will prove to distract us and try to bring us away from efforts such as this,” he continued. “As I pray for safe skies, safe flights and good drops for all of our crews, I will also pray that, in our hearts, we will always have the zeal and commitment to make sure that this operation continues for many, many years to come.”

Operation Christmas Drop organizers and volunteers gathered a total of 62,000 pounds of food, clothing, supplies and various goods from the local and military communities to deliver to approximately 30,000 islanders.

Coble acknowledged the many months of hard work that dozens of service members, organizers and volunteers have devoted to ensuring the success of such a longstanding tradition, also highlighting the sense of community that is so important during the holiday season.

She expressed the sincere gratitude of the island people.

“Believe me. The people of the Federated States of Micronesia very much appreciate your time and effort,” Coble said. “This is something they look forward to every year. Everything that you send down there is really put to good use.”

During the holiday season of 1952, a B-29 Superfortress aircrew noticed islanders waving at them from the island of Kapingamarangi, inspiring the aircrew to drop a bundle of supplies attached to a parachute to the islanders below.

Service members with the Royal Australian Air Force and Japan Air Self-Defense Force are also partners in the effort.

US Naval Base Guam