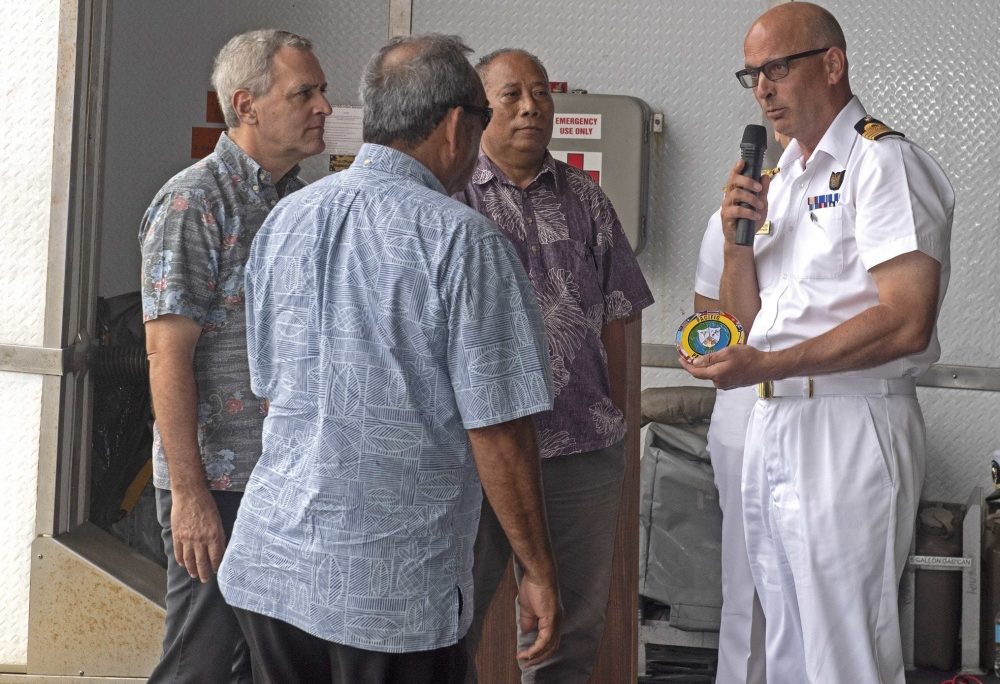 The ceremony, which featured remarks from mission leadership, host nation and partner nation leadership, and regional military leadership, celebrated the disaster response capabilities demonstrated and learned during the mission stop.

“This mission is one we can be proud of,” said His Excellency President Peter Christian, president of the Federated States of Micronesia, noting the 47 hours of humanitarian assistance and disaster response training, six completed engineering projects, 110 medical subject matter expert exchanges, and 16 community outreach events accomplished while in Chuuk.

The real-world skills demonstrated in the outer islands translated to successful training and side-by-side demonstrations in Chuuk.

“After providing emergency and real time medical and infrastructure capacity building and disaster response in the Mortlocks and Northwest outer islands of Chuuk, which were hard hit by Typhoon Wutip, in partnership, the dedicated, multinational Sailors, Soldiers, and Marines of USNS Brunswick entered the Chuuk Lagoon to resume its scheduled activities on Weno and the surrounding islands,” said U.S. Ambassador to the Federated States of Micronesia, the Honorable Robert Riley.

“It’s a mission about building each other’s experience and expertise, working towards disaster risk reduction,” he said. “Disaster emergencies transcend boundaries and require comprehensive preparation and coordination. We are stronger and more efficient when we work side by side, as we have demonstrated in the last month in the islands of Chuuk State.”

The crew of Pacific Partnership and Brunswick concluded their two-week visit to Chuuk after disaster response work in the outer islands, which proved that “Pacific Partnership 2019 was not just an exercise; it was really a response,” said Rear Adm. Shoshana Chatfield, commander, Joint Region Marianas.

“It was so delightful to see how this crew came together to develop the capabilities, even as each day’s events unfolded, and transportation was difficult, including finding navigation routes that would allow access to each island – each problem you solved made you a better team and gave the region additional capabilities,” she said.

U.S. Navy Information Systems Technician 2nd Class KN Nethon, U.S. Army Spc. Rally Gilmete, and U.S. Army Sgt. Joseia Lemari received special thanks for their participation in Pacific Partnership 2019. All three have ties to the region: Nethon is a native of Chuuk; Gilmete is from Pohnpei, FSM; and Lemari, a native of Majuro, Republic of the Marshall Islands, attended Xavier High School in Chuuk.

Pacific Partnership, now in its 14th iteration, is the largest annual multinational humanitarian assistance and disaster relief preparedness mission conducted in the Indo-Pacific. Each year, the mission team works collectively with host and partner nations to enhance regional interoperability and disaster response capabilities, increase stability and security in the region, and foster new and enduring friendships in the Indo-Pacific.