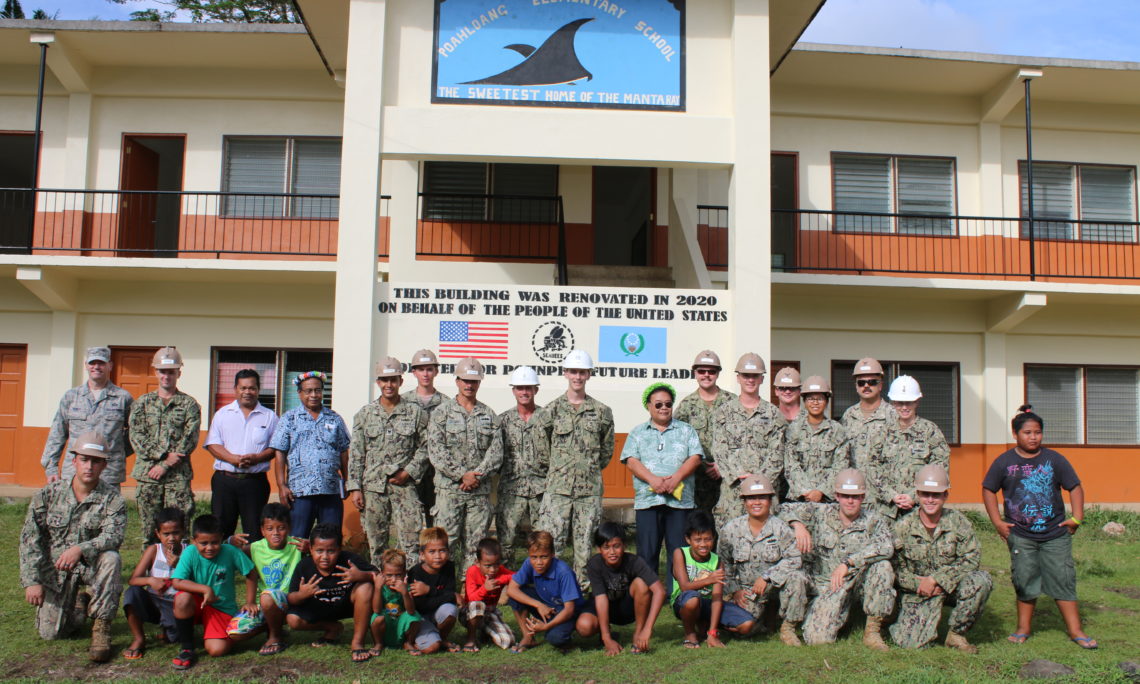 Naval Mobile Construction Battalion FIVE with Governor Reed B. Oliver and faculty and students at the Pehleng Elementary School.

At the ribbon cutting at Pehleng Elementary School to celebrate the completion of the renovations conducted by the Civic Construction Action Detail (CCAD) Program Naval Mobile Construction Battalion FIVE (NMCB5), Deputy Chief of Mission at the U.S. Embassy, Heather Coble, talked about how the work of the Construction Battalion plays an important role in strengthening our ties and special relationship. “Members of the U.S. government funded Construction Battalion, or “Seabees,” have been deployed to FSM for decades to continue building the partnership between the two countries, but they are also deployed throughout the Pacific region to include, Guam, the Philippines, Palau, and the Marshall Islands to name a few,” she said.

Governor Reed Oliver noted the enthusiasm of the young school students, expressing utmost appreciation to the CCAD team and telling them that he hoped they had had the time to build many friendships at the school and within the community of Kitti. During the site tour, Governor Oliver, who had previously visited the site with U.S. Ambassador Robert Riley during the initial stages of the renovations, expressed to Lt. Brian Wood, Officer in Charge NMCB5, how he appreciated the quick turnaround and quality of work that was done.

The CCAD program has proven to be successful not only with its projects, but with other activities in the communities in the FSM, including:

At the Pehleng school, the CCAD members have been performing renovations, such as painting, fixing plumbing and electrical functions, framing the roof, installing metal roofing, replacing doors and windows, and providing wall sheathing. Four classrooms now have new tile, new fans, new lights, and new solid core doors. Two bathrooms have new toilets, new sinks, new plumbing, and new roofs. Before this project, they completed the Nan-Uh Dispensary that will be servicing the community in both Uh and Madolenihmw. Ms. Coble congratulated the CCAD Team for their great work, and wished Principal Barnabas, teachers, and the students many fruitful years enjoying their newly renovated school.