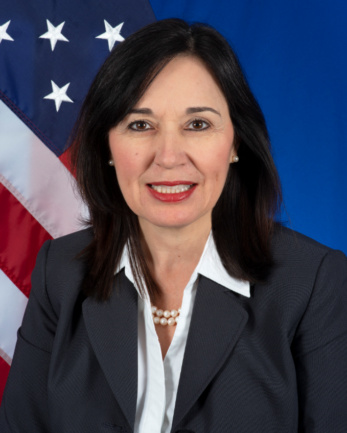 Carmen G. Cantor, a career member of the Senior Executive Service, is the U.S. Ambassador to the Federated States of Micronesia. Previously, she served as Director of the Office of Civil Service Human Resource Management in the Bureau of Human Resources, Executive Director for the Bureaus of Educational and Cultural Affairs (ECA) and International Information Programs (IIP), and Executive Director of the Bureau of Counterterrorism (CT) at the U.S. Department of State. In this capacity, in pursuit of U.S. national interests in the fight against global terrorism, she provided support to the Coordinator for Counterterrorism and senior staff; management and oversight of CT’s executive office operations; and collaborated and coordinated with other agencies and organizations.  Ms. Cantor also served as the Deputy Director of the Office of Recruitment, Examination & Employment (REE).  During this time, the Department organized and implemented the largest expansion of recruitment, assessment and hiring in State Department history.

Before re-joining the Department of State, Ms. Cantor worked as Director of the Office of Civil Rights at the Foreign Agricultural Service and Director of the Office of Equal Employment Opportunity of the U.S. Federal Maritime Commission in Washington, DC.  Her thirty plus years of federal career also includes several positions in the Office of Civil Rights and in the Bureau of Human Resources at the U.S. Department of State, and at the U.S. Postal Service.

Ms. Cantor was the Leadership Liaison and formerly a past President of the Department of State’s Hispanic employee affinity group, HECFAA. Previously, she was on the Board of the University of Puerto Rico Alumni Association (UPRAA) in Washington, DC. and has been a member of Girl Scouts, the National Association of Hispanic Federal Executives, the Gallup Panel and Civil Air Patrol.

In 2014, she received the Secretary of State’s EEO Award for her work with HECFAA.  Previously, she received a Superior Honor Award for her outstanding performance as the first Executive Director in the Counterterrorism Bureau and a Meritorious Honor Award for outstanding performance and for providing inspiring leadership and management in the Bureau of Human Resources’ Office of Recruitment.  In May of 2014, Latina Style magazine named her one five Latina Trailblazers of American Foreign Policy at the U.S. Department of State.

Ms. Cantor was raised in Puerto Rico and earned a Certificate in International Migration Studies from Georgetown University’s School of Continuing Studies, an M.A. in Labor Relations from the Inter American University of Puerto Rico, and a B.A. in Sociology from the University of Puerto Rico, Mayaguez Campus. She has attended executive courses at Harvard University’s Kennedy School of Government; Cornell University; the Center for Creative Leadership, the Air War College, DOD Vanguard’s Program, and others. She is also an alumna of the National Hispana Leadership Institute and the Aspen Institute’s International Career Advancement Program. She speaks Spanish.