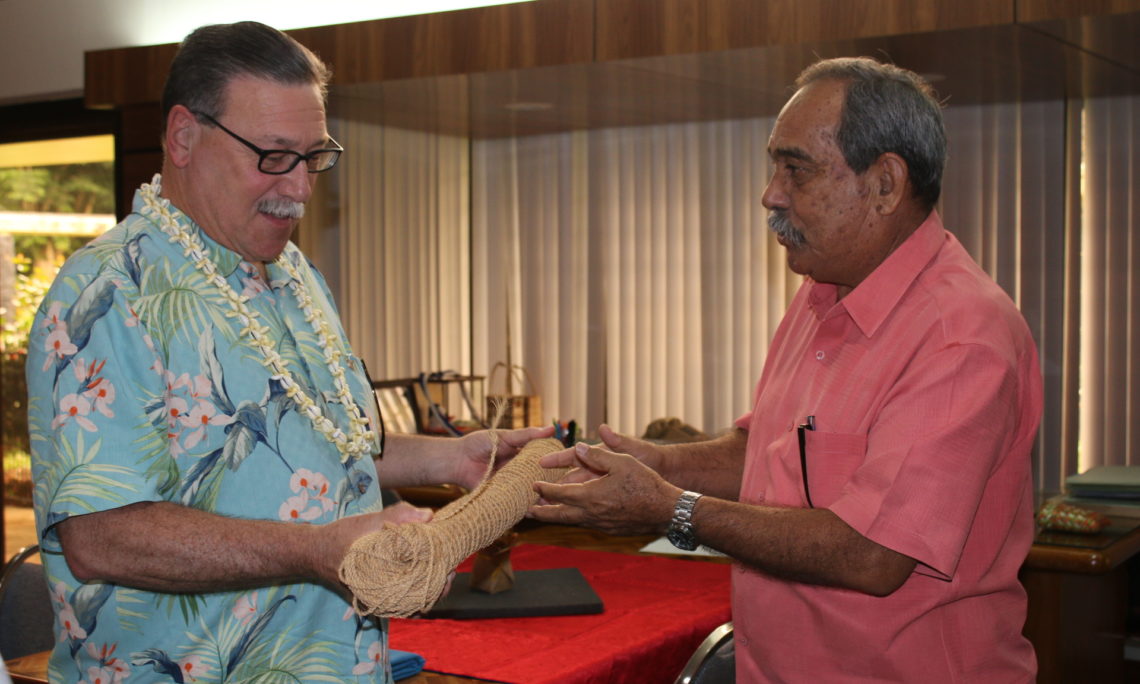 POHNPEI, MICRONESIA– U.S. Assistant Secretary of the Interior for Insular and International Affairs Doug Domenech today concluded his official visit to Pohnpei, the capital of the Federated States of Micronesia (FSM), where he conferred with President Peter M. Christian on the continuation and strengthening of the U.S.-FSM relationship under the Compact of Free Association.  While at the national government capital complex in Palikir, Domenech also met with Speaker of the FSM Congress Wesley Simina, Vice Speaker Esmond Moses, other senators and staff.  Accompanying the assistant secretary were Nikolao Pula Director of the Office of Insular Affairs (OIA) also Chair of the Joint Economic Management Committee (JEMCO) and OIA staff.

“On behalf of U.S. Interior Secretary Ryan Zinke, I am here to celebrate the U.S. longtime friendship with the people of the Federated States of Micronesia,” said Assistant Secretary Domenech.  “The U.S. and the FSM embarked on this journey together many years ago following World War II.  Since then the FSM has transitioned from trusteeship to self-governance in 1986, and will transition again in 2023 from direct grant funding assistance to trust fund distributions,” he continued.  “The U.S. and FSM will continue to work towards the mutual goals under the Compact of Free Association to promote economic advancement, budgetary self-reliance, and economic self-sufficiency,” Domenech added.

Domenech toured the Nanpohnnmal power plant and met with Nixon Anson Pohnpei Utilities Corporate General Manager and staff regarding the current problems on-island with power generation and the need for maintenance funding.  The Assistant Secretary visited the International Organization for Migration to learn more about emergency disaster assistance in Pohnpei and the FSM, and the Micronesia Registration Advisors on the FSM captive insurance domicile.

Domenech took a boat ride through the Sokehs Dau mangrove channel with Willy Kostka of Micronesia Conservation Trust and other natural resource conservation leaders to learn about mangrove ecosystems and their vital role in food security and protection from storms.  Domenech visited Nan Madol Ruins, guided by FSM and Pohnpei State Historic Preservation Officers Gus Kohler and Jason Lebehn, following which he drove through the former campus of the Pohnpei Agricultural and Trade School and went to the Kepirohi waterfall.

“The Assistant Secretary and I want to ensure that the U.S.-FSM relationship is relevant,” said OIA Director Nikolao Pula. “We concur with President Christian that together we should make the necessary mutual adjustments as we move toward the 2023 transition and continue strengthening our relationship.”

Assistant Secretary Domenech and his team, including U.S. Ambassador Riley, concluded the visit to Pohnpei with a traditional sakau ceremony hosted by FSM President Peter Christian and several members of his Cabinet including Foreign Minister Lorin Robert and Chief of Staff Leo Falcam FSM’s members of the Joint Economic Management Committee also known as JEMCO.

Since implementation of the Compact of Free Association in 1986, the United States has provided over $2.5 billion to the Federated States of Micronesia. This U.S. investment under the Compact, in addition to numerous other federal programs, has improved schools and hospitals, supported historic preservation programs, built roads, secured airports, monitored and documented weather patterns, immunized children, opened doors to higher education, provided postal services, and provided salaries in critical sectors of education and health services.  U.S. Government support overall has helped lay the foundation for a stable government, where democratic principles and the rule of law thrive, adding a measure of economic security to the islands in the Federated States of Micronesia.