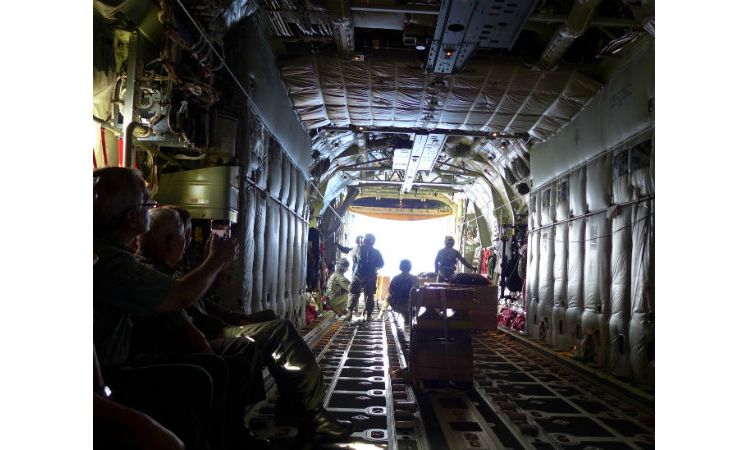 FSM Vice President Yosiwo P. George, Commander of US INDOPACOM Admiral Phil Davidson and US Ambassador to the Federated States of Micronesia (FSM) Robert Riley observed the pushing off of the first bundle of Christmas gift package from a C-130J Super Hercules in the Pacific skies above Nama Island on Monday noon, kicking off the annual Operation Christmas Drop (OCD), a humanitarian & training tradition started by US Air Force 67 years ago in Micronesia.

“This is the first time the INDOPACOM Commander has participated in an OCD flight, and the first time the flight originated in a location other than Guam,” said Ambassador Riley. Other participants attending today’s operation included FSM national and Chuuk state leaders Chuuk Governor Johnson Elimo, FSM Secretaries Lorin Robert and Andrew Yatilman, and Chuuk Speaker of House Innocente Oneisom.

“During the one hour airdrop today, we delivered two big pallets weighing over 800 lb filled with all sort of items such as toys, fishing equipment, parts for motor engines, medical supplies, etc. to people living on the remote island of Nama,” said Ambassador Riley.

Before the start of Monday’s OCD, U.S. Ambassador Riley and INDOPACOM Commander Davidson met with visiting FSM Vice President George and a number of Chuuk State leaders, during which Admiral Davidson emphasized U.S. commitment in partnership with Indo-Pacific countries on key issues including regional security and strategic cooperation.

This year OCD will deliver more than 200 large pallets to 56 islands throughout Micronesia during the week-long airdrop operated by UA Air Force 36th Wing. OCD is the longest-running humanitarian airlift operation run by US military. Since 1952 when the first pack of goods were parachuted to islanders of Kapingamarangi after the US aircrew spotted the waving hands at the passing WB-50 Superfortress, more than 1 million pounds of charitable goods have been airdropped to islanders throughout some of the most remote locations in the Pacific ocean. Every year, hundreds of volunteers and numerous NGOs are involved in collecting and preparing the packages. Bruce Best, a retired professor at University of Guam, maintains contact with these remote islands through HF radio to coordinate the drop activities.

Onboard the C-130 aircraft today were two FSM national citizens serving in the US military, TSgt Elmae Mori and LCPL Christopher Rodriquez, who proudly participated in this year’s OCD in their home country.

In addition, Vice President George thanked Admiral Davidson for inviting Elmae Mori and Christopher Rodriquez to participate in Monday’s historic event and hoped to see more FSM citizens serving in the US military participating in upcoming US military programs in the FSM.

“Having the two US military personnel attending the OCD and the meeting is an embodiment of the unique and special relationship that FSM and the United States have,” said Secretary Robert.

Merry Christmas and happy holidays from us to you all!