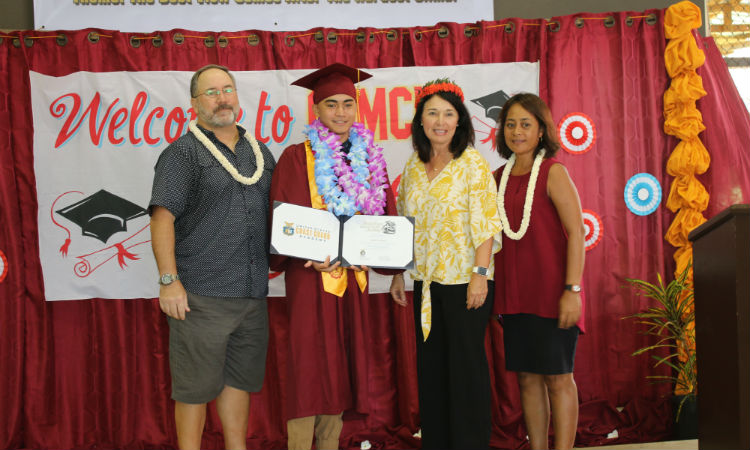 On June 6, Ambassador Carmen G. Cantor attended the Our Lady of Mercy Catholic High School (OLMCHS) graduation to present the United States Coast Guard Academy certificate of appointment to Andrew “Andy” Sipos. Andy is the fourth citizen from the Federated States of Micronesia (FSM) to be accepted into the prestigious school. He plans to major in Marine and Environmental Science at the USCGA. He is the son of Mr. Michael Sipos and Mrs. Maiumy Halbert Sipos.

Prior to attending OLMCHS, Andy graduated from the Pohnpei Catholic School (PCS) with first honors and was also a distinguished student in the Principal’s list. He is also a talented tennis player that has competed regionally and internationally in Guam and Fiji. His accomplishments include being awarded a scholarship in 2018 by the U.S. Department of Interior to participate in the Junior State of America (JSA) advanced placement courses at Stanford University in California. In 2019, Andy also participated in the Habele & U.S. Department of Interior Robotics Competition and was awarded second place. He was also recognized by Pohnpei State Department of Education with the Outstanding Academic Excellence Award.

Under the Compact of Free Association, the government of the FSM may nominate candidates to compete for admission at each of the U.S. Service Academies: the Naval Academy, the Air Force Academy, the Coast Guard Academy, the U.S. Army’s Military Academy (West Point), and Merchant Marines’ Academy (Kings Point). The program offers a bachelor’s degree full scholarship for citizens of the FSM that are selected.