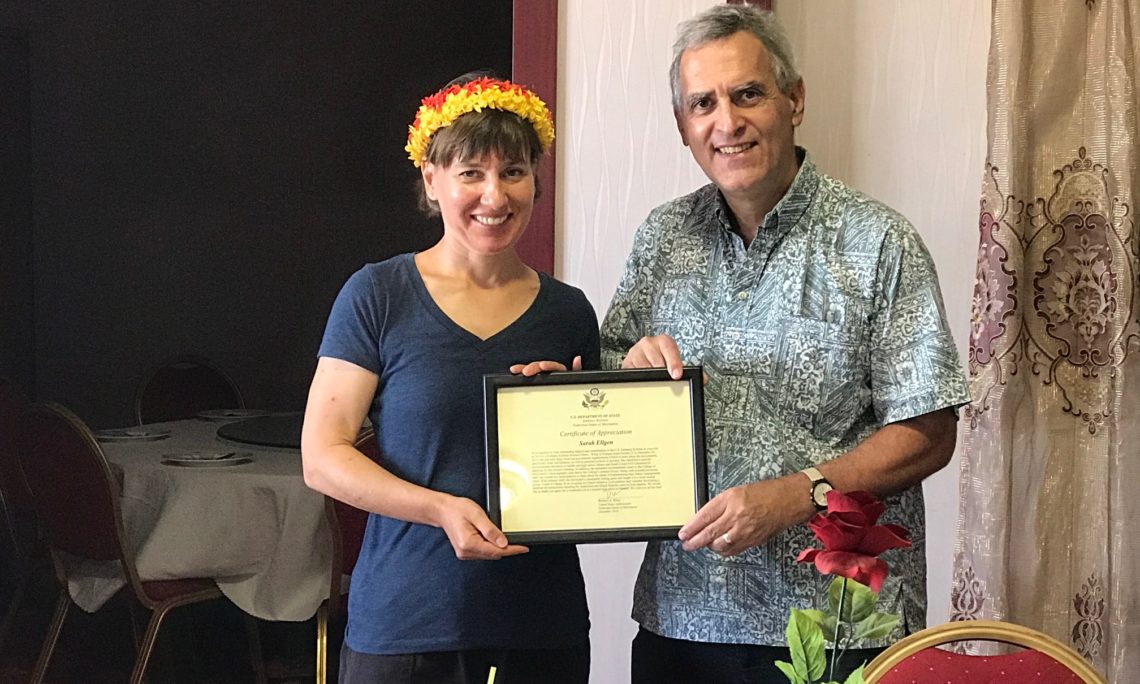 With its lush verdant rainforests, chattering colorful birds, and dense mangrove forests encircled by extensive coral reefs, the natural environment of Pohnpei is striking to the newcomer. Pohnpeians have successfully conserved and maintained these beautiful ecosystems and natural resources for centuries, but today they face new challenges from climate change, overfishing, forest clearing for sakau, piggery operations, and other human activities. The mix of sedimentation, contaminant run-off, and biodiversity loss from these new issues have ultimately created an unhealthy coral reef environment.

Pohnpei has a large coral reef area in relation to its human population size. However, land-based stressors and overexploitation of fisheries have impacted these natural resources, resulting in degraded coral reefs that have impaired ecosystem functioning and produce fewer fish. Pohnpei’s predominant type of coral reef fishing activity — nighttime spear fishing — leads to overharvesting, as fish are easily caught while sleeping. For instance, parrotfish, which is one of the most popular reef fish and a target of nighttime spearfishers, has experienced a notable decline in landings over the years. From 2006 to 2015, the annual overall volume of marketed parrotfish fell around 20 percent while the amount of fishing has increased and shifted from inner to outer reef areas. In general, Pohnpeians attest that they must fish longer and travel farther to catch fish — and the fish now harvested are increasingly smaller and immature, resulting in less reproduction and, thus, fewer fish for future generations.

Research suggests that people are fishing coral reefs at a highly unsustainable rate, targeting spawning and juvenile fish. Substantially more fish are now being caught than the reefs are capable of producing, resulting in a downward spiral of reef populations. From 1970 to 2010, green humphead parrotfish (kemeik) declined 71 percent in abundance and 80 percent in size, and humphead wrasse (merer) declined 70 percent in both abundance and size. Though once common, adults of these two iconic species are now rarely seen, while the numbers of spawning fish have declined year after year. What’s more, giant clams, coconut crabs, and marine turtles have also become rare, and reports suggest declines in shark and manta species, as well. As some fish species become less prevalent, other species that are important to maintaining reef health are being more heavily fished, which will result in further loss of corals and erosion of reef ecosystems.

What can be done to restore coral reef fisheries in Pohnpei? As with many environmental problems, recovery requires a comprehensive approach to tackle stressors originating from multiple sources. Coral reef health would benefit from reducing soil and contaminant run-off. The coral reef fishery would benefit from monitoring fishery landings, enforcing existing restrictions on size and species of concern, and potentially developing restrictions for additional species currently not protected (as well as, perhaps, restrictions on fishing type, specifically nighttime spearfishing). Diversity and quantity of fish have improved where local marine protected areas have been established and enforced. In addition, increasing community awareness about the natural environment and developing community-based fishery management plans (as local non-profits are also doing) are important as well. As we become more aware of our natural environment, we value it; Pohnpei, with its rich and abundant diversity, deserves it.

Sarah was a Science Fellow at the US Embassy in Pohnpei. She works for the National Oceanic and Atmospheric Administration in Honolulu, Hawaii.