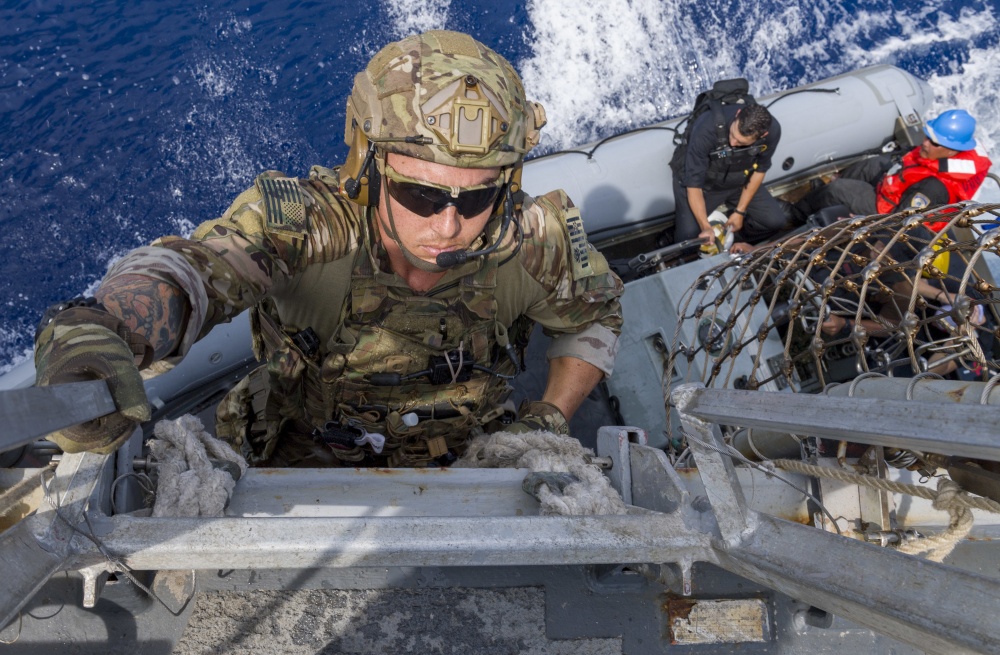 A member from U.S. Coast Guard Law Enforcement Detachment climbs down to a rigid-hull inflatable boat during an Oceania Maritime Security Initiative (OMSI) boarding mission. The OMSI program is a secretary of defense program leveraging Department of Defense assets transiting the region to increase t

A Coast Guard Law Enforcement Detachment from Tactical Law Enforcement Team Pacific embarked USS Michael Murphy (DDG 112) and conducted 11 fisheries enforcement boardings with the assistance of the ship’s visit, board, search and seizure team and law enforcement shipriders from the Federated States of Micronesia and the Republic of the Marshall Islands.

All boardings were conducted in the exclusive economic zones; eight were in Federated States of Micronesia and four in Republic of the Marshall Islands.

Boarding teams conducted inspections of the vessels to ensure compliance with individual nation’s laws and regulations and conservation management measures.

Partnership between the Coast Guard and Navy supports OMSI, a Secretary of Defense program to use Department of Defense assets transiting the Pacific region to build maritime domain awareness, ultimately supporting the Coast Guard’s maritime law enforcement operations in Oceania.

“I am proud to say that the crew performed superbly across all mission areas as well as being tremendous ambassadors afloat and ashore for the United States throughout our deployment,” said Cmdr. Kevin Louis, commanding officer of USS Michael Murphy.

The Coast Guard is responsible for patrolling the waters around the numerous islands belonging to the United States throughout the region. Each of these islands has territorial waters stretching out to 12 nautical miles from shore. Beyond that, stretching out to 200 nautical miles is an exclusive economic zone, an area defined by international law that allows each nation exclusive rights to the exploration and use of the marine resources within.