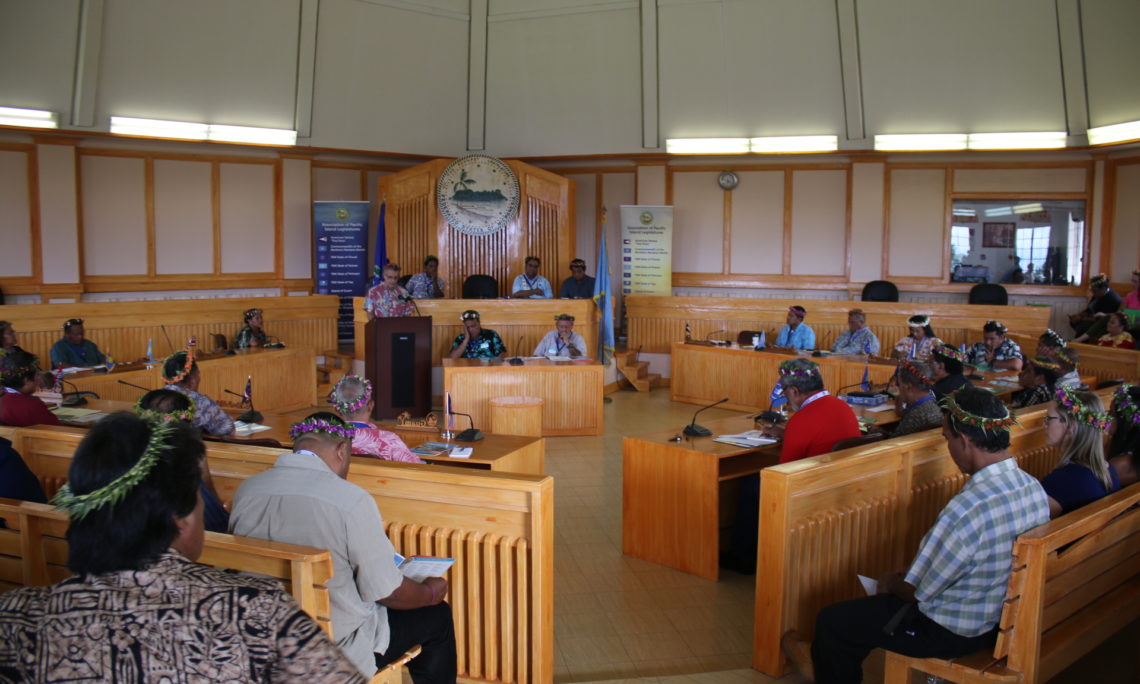 Ambassador Robert A. Riley III delivering his keynote address at the Association of the Pacific Island Legislatures 37th General Assembly on June 26, 2018 at the Pohnpei State Legislature Chamber.

It is a great pleasure and an honor to be meeting with you today for the opening of the Association of Pacific Islands Legislatures. It is quite an august group we have here… there are too many people to enumerate here, but I would like to recognize President Peter Christian and the diplomatic corps… and I would also like to thank the Pohnpei state hosts, particularly Lt Governor Reed Oliver and Speaker Fernando Scaliem, for agreeing to sponsor this 37th General Assembly, and for inviting me to speak. I have looked at your program, and indeed it looks quite impressive and ambitious, with lots of excellent speakers; even a softball game… and an excursion to fabulous Ant Island!

The topic of this assembly is “Climate Change: Regional policies and action plans regarding climate change mitigation”. I have looked over the names of those who will be presenting, and they are quite knowledgeable about the subject, certainly far more than I. Some have been working as specialists in the field for many years; others are dealing with the effects on a day-to-day basis. Nonetheless, in the short time I have served in the FSM, I have seen the changes wrought by rising sea levels, and the need for action to mitigate its effects. Certainly, as the United States develops foreign policy and its strategic direction for the Pacific, mitigation perforce must play an integral part.

For many of you, sea rise is an existential threat. Already, king tides are becoming more extreme and destructive; fresh water reservoirs are in danger of being contaminated by sea water; and weather patterns are changing in unfamiliar and unpredictable ways. Critical decisions on what sort of mitigation can and should be implemented are on the near horizon; all of the proposed solutions are costly, some moderately so, and others immensely.

The Federated States of Micronesia is a microcosm of the Pacific, and as elsewhere in this region, there are two tiers of concern about the threat of rising seas – grave and extreme. The main islands and some of the outer islands are a combination of low-lying coastal areas and mountainous interiors; there is a steady encroachment on the coastal areas, and there are medium and long term plans afoot to push infrastructure, businesses, and residences to higher elevations. One project, in Kosrae, to re-locate a road already threatened by the sea further uphill has already been funded and is awaiting implementation. On the other hand, most of the outer islands are atolls, and the urgency to mitigate is much greater. There is no higher land to move to. In some cases, people are leaving these atolls for the main islands, although in relatively small numbers for now; but should sea rise accelerate, that is sure to change.

The U.S. Government has taken an active interest in helping Pacific Island Countries in their efforts to adapt to rising sea levels. USAID is currently sponsoring three regional programs in the Pacific to assist Pacific Island Countries; each program has a different focus. Taking a grass roots approach, the Pacific American Climate fund, or PACAM, provides grants to civil society organizations to reduce long-term vulnerabilities associated with climate change, and to ensure the sustainability of their efforts and improve their ability to access and manage funds from other donors. The USAID program ISACC, which stands for Institutional Strengthening to Adapt to Climate Change, takes a slightly different tack, collaborating with SPC and SPREP to develop high level policies and strategies to strengthen the national institutional capacity of Pacific island countries to effectively plan, coordinate and respond to the adverse impacts of climate change. The newest program is USAID Climate Ready, which has an office right here in downtown Pohnpei; in fact, right down the street from here. Climate Ready works with governments and other stakeholders to prioritize areas of support that align with their climate adaption plans and goals in order to appropriately update laws and regulations; ensure vulnerable groups are considered in policy development and project planning; and support country readiness goals for accessing increased amounts of climate change funds.

But this is just the beginning – there is much more to do. We are at the point where we are collaboratively positioning ourselves to move forward with effective mitigation through planning, capacity-building, and adjusting the regulatory environment. To succeed in implementation we must continue to work together in partnership with the understanding that this is for the good of all. United, we can and we must continue this critical effort.

Thank you very much.