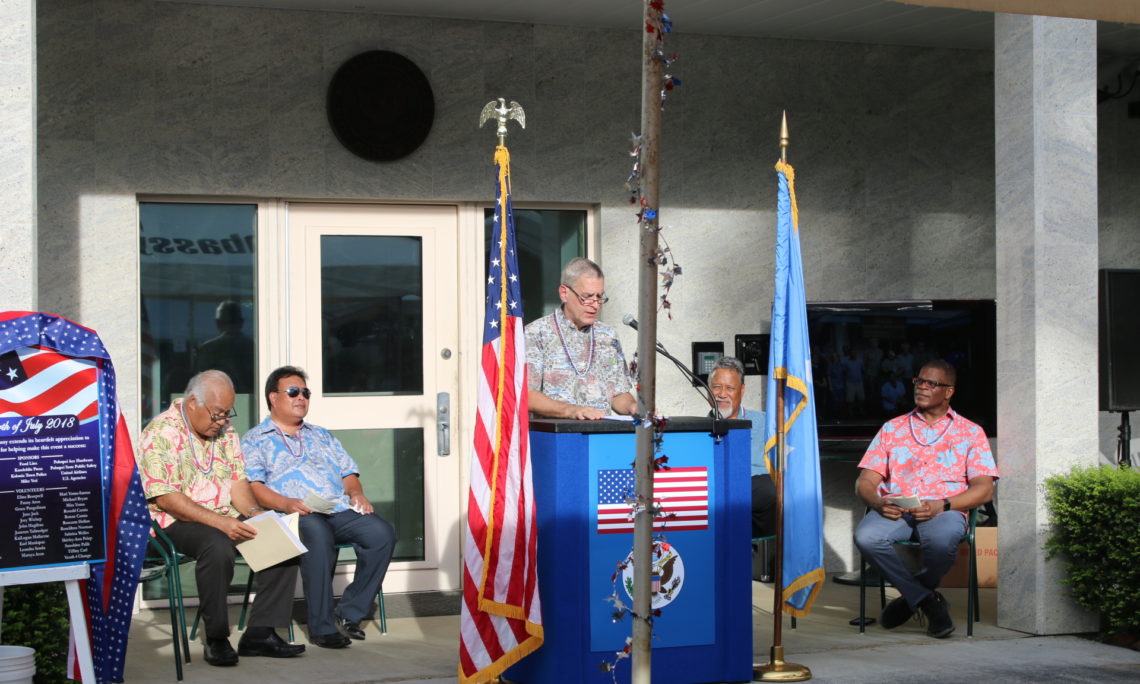 Hello! And welcome everybody! So good to see everyone again!

The successful preparation for this 4th of July celebration has been another amazing feat by my US Embassy team, and it has taken months of planning and execution to put it all together. I am really proud to be a member of this group.

Can I ask all Embassy staff to show themselves? They are wearing red t-shirts with the logo, “Friends in Freedom”. Please give them a round of applause!

Before I begin my remarks, I would like to recognize:

Good evening and a hearty welcome once again to our Fourth of July, this, its two hundred forty second celebration. We come together again to commemorate the signing of the Declaration of Independence in 1776, which set our course as a nation; together with the Constitution, it is the foundational document of the United States, expressing eloquently the beliefs that remain the principles of our democratic experiment that, I will quote once again as I did last year, “all men are created equal, that they are endowed by their Creator with certain unalienable Rights, that among these are Life, Liberty and the pursuit of Happiness. — That to secure these rights, Governments are instituted among Men, deriving their just powers from the consent of the governed”, unquote. These words prepared the ground for everything that followed: the war of liberation against the British, the U.S. Constitution, and our system of governance.

Of course, our founders were humans, not gods, and as such were a mixture of virtues and foibles, which could often be paradoxical. The deep and idealistic freedom lover Thomas Jefferson, who wrote most of the Declaration of Independence, and who eloquently and at length decried slavery, somehow could not see fit to free his slaves; John Adams, who considered himself a simple Puritan and fiery revolutionary, sometimes displayed royalist manners; Alexander Hamilton, amazingly perceptive on what was required to lay the strong institutional foundations for a great nation, sometimes showed very poor judgment regarding personal matters; and Benjamin Franklin, the humorist, scientist, and philosopher who seemed to be present at the creation of every critical step in the revolutionary and nation building process, and was fully committed to the cause, was also often slow to join the party. Even the one person indispensable to the birth of the new nation, George Washington, without whom the United States would likely not have won the revolutionary war, would likely not have successfully concluded the Constitution, and likely would not have survived the first eight years of nationhood; and who had impeccable integrity, judgment and foresight, and unbelievable bravery; had deep reservoirs of anger that, outside the heat of battle, only occasionally erupted – thank God.

The founders, together, as a team of rivals as it were, were vital to the birth of the United States; and, certainly at least partially in self-recognition of their own flaws, ensured that the United States would not be a nation of men, but a nation of laws. The founders were actually quite dissimilar in character, with highly differentiated points of view; clashes between them eventually detonated in the fierce political combat of the 1790s. Thanks to their commitment to the Declaration of Independence and the Constitution, their disputes did not devolve into violence and revolutionary chaos, but instead strengthened their, and their compatriots’, understanding of the importance of the rule law. The rule of law they built had a self-reinforcing effect on the future of the institutions that they created, and success bred success.

Fast forward to World War II, when, after 150 years of institutional change, including the extreme tension always latent in the Republic from its beginning that finally exploded in the Civil War, but which almost miraculously led to the further strengthening of our democratic institutions – the United States and the world faced the Axis threat. The foundation laid in the late 1700s was put to a supreme test in the 1940s, and helped to enable what we now call the Greatest Generation to prevail; it also set the stage for the post war order of open sea lanes and ever increasing economic interdependence. Here was the ultimate victory of the rule of law, transparency, and freedom, written on a global scale. The Asia-Pacific strategy, whose name is currently topical, but whose principles are really 70 years old, was truly born then; it has advanced democratic, economic, societal, and technological development, and we intend that it continue. We are proud to count the FSM as partners in that effort.

The partnership is deep: the United States is committed to defending the FSM as it would its own shores, and FSM citizens enlist in the US military in greater numbers per capita than any of the U.S. 50 states. We collaborate to advance development within the FSM, to ensure that it is fully ready to meet the challenges of 2023 and beyond. We, Micronesians and Americans alike, freely move between our two countries as we join forces together, in work, school, and play. Together, we promote the rule of law, transparency, and freedom, and hence our theme of this year’s Fourth of July – Friends in Freedom.

Our friendship has a long history, beginning in the rigors of World War II; continuing through the Trust Territory days, when we worked with Micronesia to pave the way for independence; until today, as we are committed to supporting the Federated States of Micronesia through the Compact of Free Association, which continues in perpetuity, and has no end.

We are facing strategic challenges in the theater that we have not faced for many years, if ever. To meet those challenges, we must act as our two nations’ founders acted – with bracing courage, foresight, and daring; throwing off the chains of old ways of thinking and embracing the new. At the same time, we must incorporate our joint legacy of rule of law, transparency, and freedom in everything we do, or our actions will lack moral substance and meaning.

And this we should do together, with singleness of purpose, and bring with us on our journey those who share democratic values, and the wish for life, liberty, and the pursuit of happiness. Just as our respective founders illuminated the path forward, lighting the fires of democracy, we must bring that same light to the region.

242 years ago, 13 colonies came together in union to declare their independence, and eventually became the United States of America. Similarly, the islands of the FSM are stronger together; in unity of purpose, they provide security and opportunity for future generations.  And our two nations will work together as Friends in Freedom to protect that future by tackling the challenges that we face in fostering sustainable economic development, combatting climate change, and enhancing maritime security, as well as the many other tests that will come our way.

We honor the FSM veterans who have served our nation and the FSM in the US military, some of whom made the ultimate sacrifice. Veterans have served in our military with valor and dedication, and we are deeply grateful for their commitment. So many have returned to the FSM and contributed mightily to their country. And they, like many other FSM citizens who join the U.S. military, demonstrate the close and mutually beneficial relationship between our nations. And the U.S. commitment to defend the FSM has no sunset.

At our celebration today, as a demonstration of that commitment, we have both the outgoing CCAD Commander LT. Tim Horton, and his replacement LT. Mohammed Akbar; and we have as well an intern for several weeks, West Point Cadet Andrew Carter. Could you all please stand and come forward?

We now pause this Fourth of July to pay tribute to our service men and women, the citizens of our two nations, who work to protect us – and the freedoms we hold so dear.   We are grateful for their courage, strength and service to our two nations.

And we salute our flag, the symbol and physical expression of what the men and women of our two nations have fought and for which they continue to fight– life, liberty and the pursuit of happiness. Let us salute each other as Friends in Freedom.