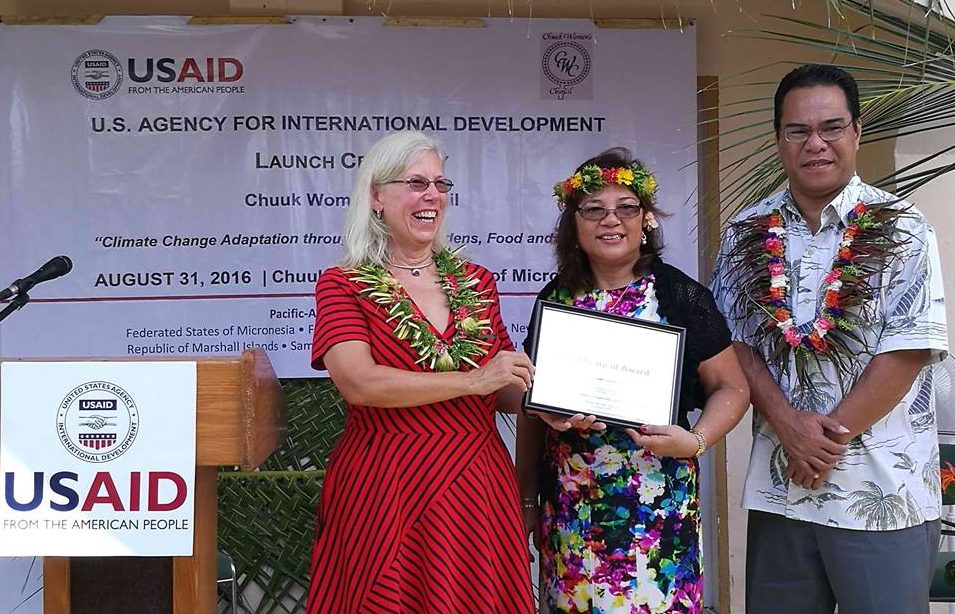 Weno, Chuuk — The U.S. Government, through the U.S. Agency for International Development (USAID), launched a new project that will reduce the vulnerabilities of communities in Micronesia to impacts of climate change. Through its Pacific-American Climate Fund (PACAM), USAID awarded a total of US$244,315 grant to the Chuuk Women’s Council (CWC).

CWC will implement the project Climate Change Adaptation through Family, Gardens, Food, and Health that will strengthen the knowledge and capacity of families and school communities to grow nutritious food. The project will support the development of climate resilient community nurseries as well as home and school gardens, building on traditional gardening and food production knowledge, and developing school curricula in support of the home and school gardens.

U.S. Deputy Chief of Mission (DCM) Joanne Cummings, who led the launch of the project together with Honorable Wesley Simina, Speaker, FSM Congress, reaffirmed the American people’s commitment to the well-being of the people of the Pacific Islands. “President Obama has called this century the Pacific Century, and under his leadership the United States is building on its long relationship with the region,” DCM Joanne Cummings said. She added, “We look forward to working with our partners in addressing the threats of climate change and ensuring a climate resilient future for Pacific Island communities.”

CWC is a non-profit organization based in Chuuk, Federated States of Micronesia, that implements comprehensive programs which enhance the well-being of women and their families in Chuuk State.