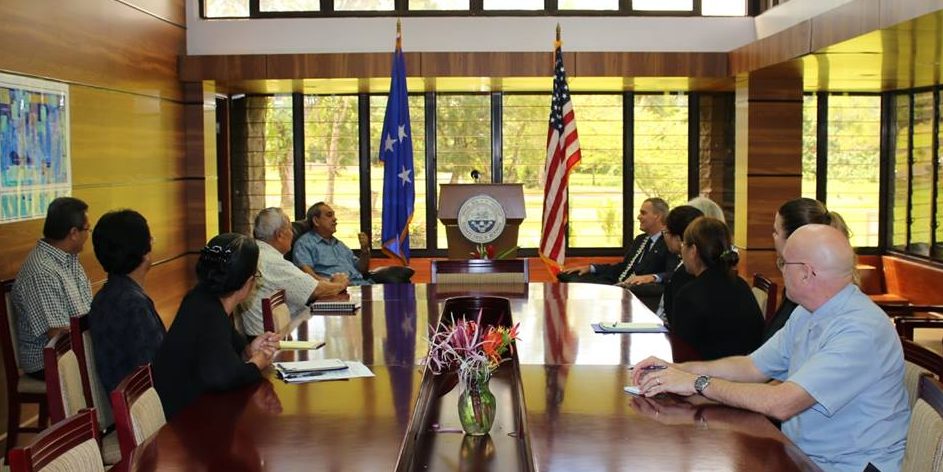 On August 16, Robert Annan Riley III presented his credentials to FSM President Peter M. Christian at the FSM National Government in Palikir, Pohnpei. Ambassador Riley is the tenth Ambassador to the Federated States of Micronesia.

Ambassador Riley is a career member of the Senior Foreign Service, class of Minister-Counselor, and now is currently serving as the tenth Ambassador to the Federated States of Micronesia. He previously served as Management Minister Counselor, U.S. Embassy Jakarta, Indonesia. With 35 years of experience in management positions, Mr. Riley is recognized as an effective negotiator and team leader who has successfully coordinated a broad range of mission-wide programs. His strong mentoring skills and background as a former Peace Corps volunteer suits him well for Micronesia, which has a strong Peace Corps presence. As Management Counselor in Manila, Mr. Riley extensively supported the mission in Micronesia, which is a background that will serve him well as Chief of Mission here.

Ambassador Riley is married to Fatima “Timmy” Nobio Ynot and has two daughters Susan Kadidia Riley who is currently a Peace Corps Volunteer in China and Carol Ina Riley who is a college student in Los Angeles, California.

Mr. Riley earned a B.A. from Yale University in 1979 and has received numerous Department performance awards. He speaks French and Spanish.

During the brief ceremony Ambassador Riley expressed his utmost respect and gratitude to be able to represent the leaders and people of the United States of America here in the Federated States of Micronesia. He looks forward to working constructively with the government of the FSM and also to travelling to the other beautiful islands of the FSM in the near future.