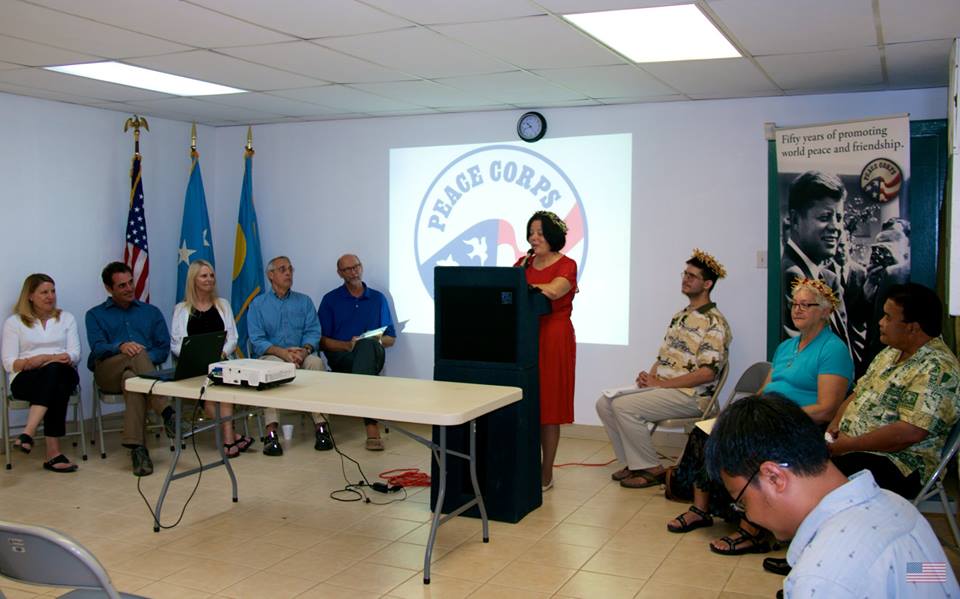 For 20 years this June, Peace Corps Response (PCR) has offered seasoned U.S. professionals the opportunity to undertake short-term, high-impact assignments to address development priorities around the world. In 2014, Peace Corps started this program in the FSM; today, eleven (11) new PCR Volunteers have been sworn-in in the FSM, as well as three (3) going to Palau. Response Volunteers will serve as Specialists in Information Technology infrastructure, long-term education planning, and teacher training (Palau); School Improvement Facilitators assisting in the FSM Accreditation process  as well as Government Financial Auditing (Pohnpei); and finally Typhoon Maysak Response  & Recovery, working in conjunction with IOM, USAID, and local governments (Chuuk, Yap).  All of them have advanced degrees and an average of over two decades of experience; they will help with building local capacity for 6-12 months depending on the sector, with the possibility of extending their service if their local counterparts desire it. Peace Corps Country Director Robert Reid performed the formal swearing in of the eleven (11) new Peace Corps Response Volunteers staying in the FSM on February 8th at the Multi-Purpose Center in Kolonia’s Tuna Commission complex. (The three [3] Peace Corps Response Volunteers going to Palau will be sworn-in there.) The Secretary of Education, Mr. Kalwin Kephas, shared congratulatory remarks on behalf of the FSM government.  Lieutenant Governor Reed Oliver also shared his appreciation for the US Peace Corps and how he looks forward to seeing the friendship and partnership of our nations continue and grow. US Ambassador, Hon. Doria Rosen, welcomed and congratulated the Volunteers on their commitment to service.  Also present to witness the event were representatives of FSM National Government, Pohnpei State Government, USAID, as well as US Department of the Interior’s Office of Insular Affairs.