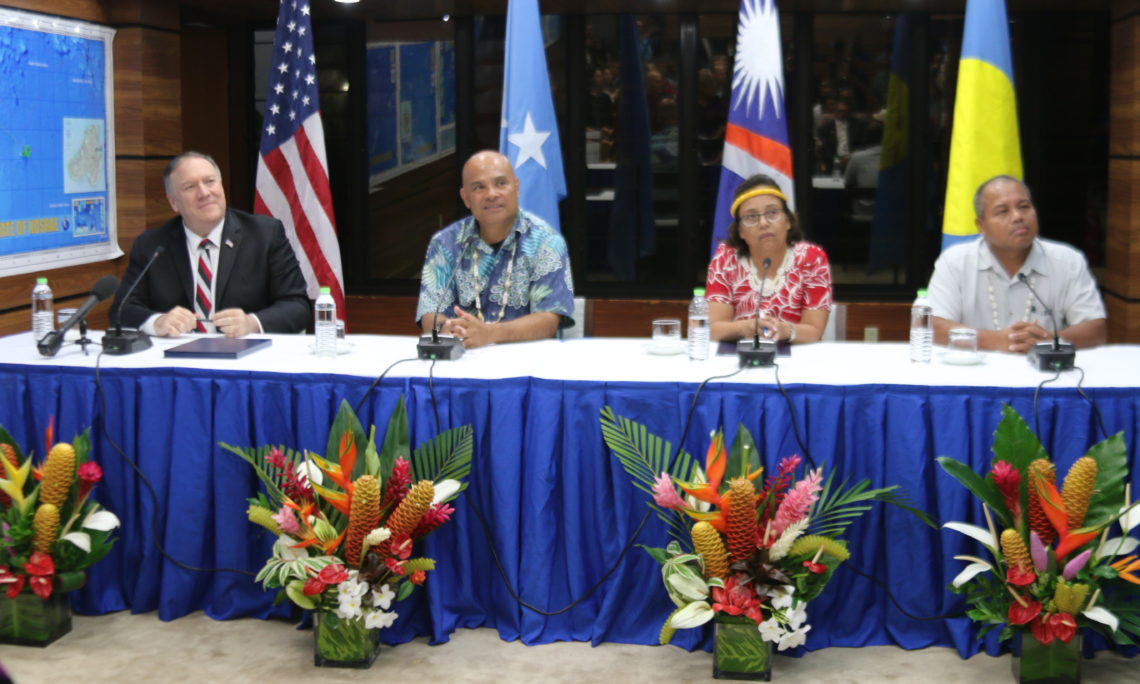 On August 5, 2019, U.S. Secretary of State Michael Pompeo made an historic visit to Pohnpei, Federated States of Micronesia (FSM) to meet with the leaders of the Freely Associated States (FAS). “I’m deeply honored to be the first Secretary of State to ever visit your wonderful country.  There’s no clearer statement of America’s commitment to strong partnerships and alliances than showing up in person, so it’s a real honor for me to be here today” said Secretary Pompeo during his press conference with the FAS leadership. The visit to FSM was the culmination of a three-country tour for Secretary Pompeo, first to Thailand and Australia, during which he tweeted about the importance of the Pacific region to the U.S.:  “If there’s one thing I want you to know today, it’s this – The United States is a Pacific nation, and we’re here to stay.”

During his visit, Secretary Pompeo announced that the United States plans to renegotiate the Compact of Free Association with all FAS countries. In his meetings with FSM President David W. Panuelo, President Hilda Heine of the Marshall Islands and Vice President Raynold B. Oilouch of Palau, he discussed the importance of the bilateral relationships and opportunities for greater cooperation on a free and open Indo-Pacific.

While in Pohnpei, Secretary Pompeo also met with FSM Speaker Wesley Simina and members of the 21st Congress of the Federated States of Micronesia to reaffirm continued partnership. To conclude his visit, Secretary Pompeo met with members of the U.S. Mission in Kolonia, Pohnpei at the Pohnpei International Airport, and later joined FSM President David W. Panuelo in laying a wreath to pay his respects to FSM’s fallen heroes.